The third Yessenov Data Lab (YDL) summer school has ended. In view of the ongoing pandemic, the school was streamed live for the first time. This year’s students, in contrast to the previous years, were 20 young scientists who need data analytics skills to process their research findings. 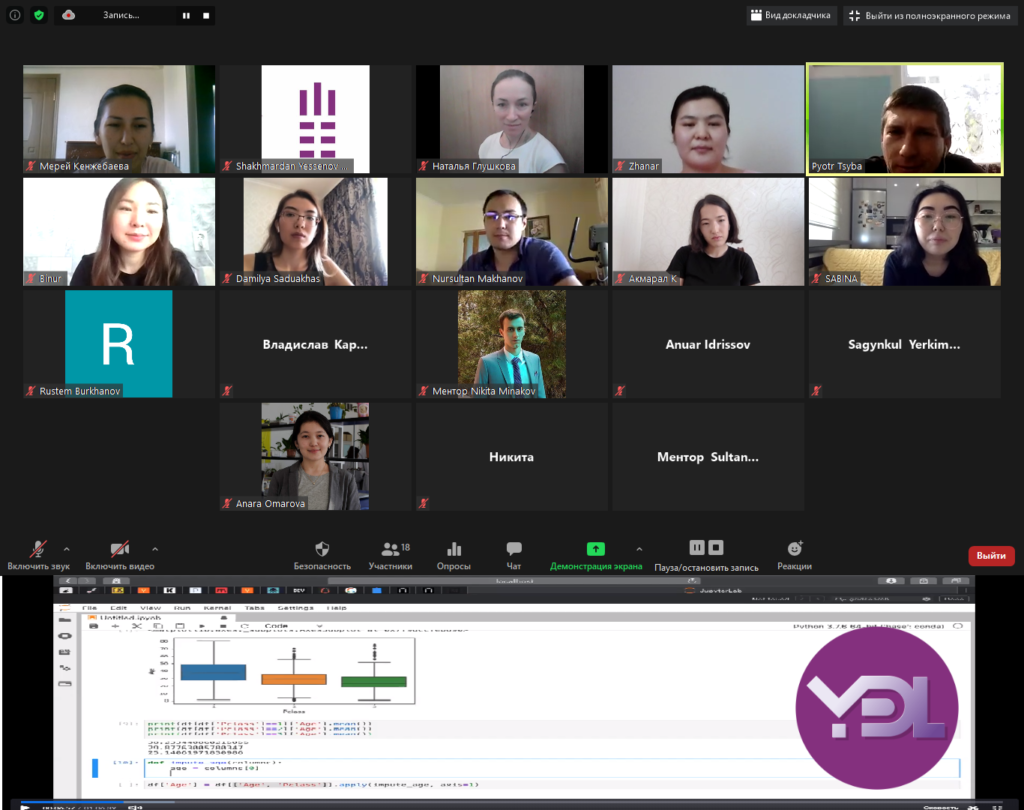 From July 13 to August 14, 20 students who were winners of the most recent Shakhmardan Yessenov Foundation competition were successfully trained at the school. The selection took place from February to May this year.

One of the YDL lecturers, who is also a lecturer at the International IT University, Aidos Sarsembayev  shared his impressions: “I found it quite interesting to work at the school. I was particularly pleased that all participants represented different scientific fields: there were mathematicians and biologists, astrophysicists and chemists – bachelor’s degree graduates, lecturers, and doctoral students. It was felt that they all won the difficult competition for a reason. They will now go on to apply their acquired knowledge of Python in their research activities. During my week, we explored statistical hypothesis testing, clustering, deep learning, and convolutional neural networks.”

In a survey conducted at the end of the school, the students rated the usefulness of the knowledge they gained differently. Some of the opinions expressed included: “cool content, I’ve been coding in Python for more than two years, but I’ve still managed to learn a lot”, “have not wasted my time”, “my network sometimes dropped, but there are records and all the material is there”, “the classes were organized in a highly professional manner”, “a wealth of material”, “I enjoyed working in the session hall with a mentor”.

Shakhmardan Yessenov Foundation Programme Coordinator Toktar Yeskendirov adds, “Due to pandemic, the foundation’s founder Galimzhan Yessenov and the board of Trustees headed by Aizhan Yessim have decided to stream the school live (to move the school to online). “It was unfortunate that this year we had to move the school to online. And the lecturers were exclusively Kazakhstani specialists. However, this did not affect the quality of the knowledge that the YDL speakers passed on to the young people. It was a rewarding and interesting experience.”

The first week’s lecturer – Dean of AlmaU Kuanysh Abeshev participated in the summer school for the third time and noted that the decision to stream the school online in connection with the current situation was apt; however, it affected the learning process: “It was difficult to monitor student involvement and to check how much they learned of what was explained to them. It is possible that someone, for example, may have been busy with something else during the training and viewed the recording of the lesson at another time. Accordingly, the ability to ask questions and obtain answers immediately was lost. There was a certain loss of time due to the quality of communication, repeated questions, waiting for an answer from the teacher because at the time the question was asked, he was busy attending to another student. Most of this year’s students had no programming experience, so we gave a variety of lectures covering that particular field.”

In three years, 61 students have graduated from the Yessenov Data Lab School of Data Analytics. The first two years, it was held for IT specialists, and in 2020 – for young Kazakh scientists who employ data analytics in their work. Among the YDL students who attended this summer’s school were representatives of the cities of Semey and Shymkent, Taraz and Uralsk, Karagandy and Almaty.