Shakhmardan Yessenov was born on August 5th 1927 in Kyzylorda oblast.  Some of the highlights of his long and distinguished career include twice being Minister of Geology in the Kazakh SSR (1961-1967) and (1974-1976), vice-chairman of the Council of Ministers of the Kazakh SSR (1965), a doctor of geological and mineralogical sciences, a member of the Kazakh SSR Academy of Sciences, receiving the State Award of the Kazakh SSR, and winning the Lenin Award.  Truth be told, a full list of his many achievements would be almost endless.  He was also a pioneer in the development of some of the world’s largest mineral deposits in the Zhezkazgan region and Mangistau oblast.

Yessenov entered the Kazakh Mining and Metallurgical Institute (today the Kazakh National Technical University) in 1944. Zhurumbek Sydykov, member of the Kazakhstani National Academy of Sciences, writes in his memoirs: “Among the young men and girls who had just become students at the institute he was especially outstanding – tall, well-built, handsome and cheerful, attractive from first sight. For me, who had come back from the war as a disabled veteran, much more senior than the other youths, I liked him much more. I wanted to know him better. This wasn’t difficult thanks to his openness and sociability. This friendship began and only became stronger in our days as students and lasted until the end of his remarkable life, which was interrupted early, to everybody’s chagrin”.

Early on at the institute, gifted students were noticed by the outstanding Kazakhstani geologist Kanysh Satpayev. Today Shakhmardan Yessenov is considered one of the most talented, successful and favourite pupils of Satpayev who in 1949 sent the young mining engineer to Zhezkazgan on a prospecting expedition, where he laid the foundation of the mining complex – one of the largest copper mining and smelting complexes in the world.

At first Yessenov worked as chief geologist on the Zhezkazgan prospecting expedition, before becoming chief engineer. Under Shakhmardan Yessenov’s leadership, a large-scale geological map of the Zhezkazgan knot was drawn, far exceeding the known boundaries of the mineral deposits. Thanks to this project, our knowledge of the geological deposits of Zhezkazgan was increased fourfold.  Yessenov also spearheaded the increase in the rate of drilling operations, a huge risk he was willing to take.  However, his mentor Satpayev at the Academy of Sciences of the Kazakh SSR and the Ministry of Geology all supported him. 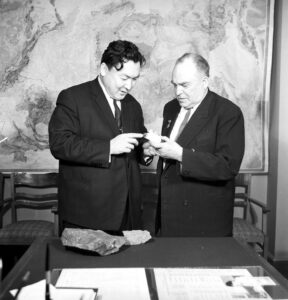 After testing more than 100 boring samples, Yessenov’s forecasts were confirmed as accurate, increasing the known mineral deposits in Zhezkazgan by more than double. Yessenov’s expedition to the region also discovered two underground sources of drinking water (Zhanay and Aydos).  It was only after this discovery that the people of Zhezkazgan were able to enjoy an uninterrupted supply of fresh drinking water.

Shakhmardan Yessenov was heavily involved in the search for a wide variety of natural resources, including copper, manganese, polymetals, nickel, cobalt, iron, and drinking water. His style and methods of investigating a potential resource was often counter to established techniques, but his sustained success brought huge economic benefits to the republic and changed the way geological work was undertaken.

Yessenov steadily climbed up the official ladder on the back of his successes, becoming Deputy Minister of Geology of the Kazakh SSR in 1960.  However, he was only to hold this position for one year, moving on to become Minister of Geology in 1961 at the age of 33, becoming the youngest minister in the USSR.

Today Shakhmardan Yessenov, along with Kanysh Satpayev and Evney Buketov, is considered one of Kazakhstan’s greatest scientists. It is thanks to his innovative work that some of the world’s largest deposits of natural resources were discovered and developed.  A large number of the industrial complexes which today power the Kazakh economy were also created at his initiative.

In the opinion of the Soviet statesman Efim Slavsky, a three-time Hero of Socialist Labour and one of the managers on the Soviet nuclear weapons program, the award of Hero of Socialist Labour was created for people like Yessenov and their contribution to the USSR – without them, we may not have discovered the oil and gas fields in Mangistau.  Before Yessenov’s expedition, the city of Aktau was just a small settlement.  Today, around 200 000 people call it home and an estimated 570 000 people in the oblast are involved in the oil and gas industry. Shakhmardan Yessenov’s contributions to the region were recognized in 1995, when the Aktau Polytechnic Institute was renamed the Aktau Yessenov Polytechnic Institute.

Geologists Day, a professional holiday of geologists, hydrogeologists, geological engineers, geophysicist, and geochemists, is traditionally celebrated on the first Sunday of April (in 2013 – on April 7). It was established by the Decree of Presidium of the Supreme Council of the USSR on March 31, 1966 commemorating achievements and merits of the Soviet geologists who had created the country’s mineral resource base. The timing of the holiday, the first Sunday in April, was chosen because the end of winter marks the beginning of preparations for summer field works and expeditions.

Geologists Day is traditionally celebrated in almost all geological and mining organizations of the former Soviet Union countries.  In addition to geologists, this day is considered as their professional holiday and celebrated by many others involved in related fields – hydrogeologists, geological engineers, surveyors, geophysicists, blasters, drifters of mines and all those people who are engaged in search and mining.

Galimzhan Yessenov founded Academic Shakhmardan Yessenov Science and Education Foundation in 2013. The Foundation’s objective is to support students and young Kazakhstani scientists who specialize in the exact and natural sciences to continue main education, to improve their professionalism and competitiveness.