The academic year has just begun, but some winners of the competition of the Yessenov Foundation still continue their research internships. Some winners of the Yessenov Launch Pad are taking courses, while others have them yet to come, and someone has even received a job offer. How did the first academic year for the students-winners of the Orleu program start? The competition was held this summer for the first time. The program coordinator of the charitable foundation Aigerim Sultan tells everything. 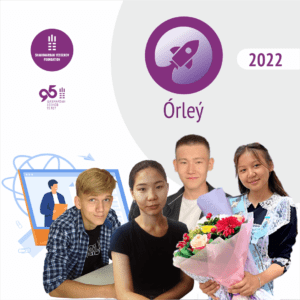 Orleu
– According to the Orleu program’s provisions, our foundation pays for 1 year of bachelor’s degree. All the winners have already started their studies. Leyla Alimkulova (20 y.o.) from Karaganda, entered Satbayev University for Information Security, and Anuarbek Ashykbayev (17) from Aktobe – Asfendiyarov KazNMU. He strives to be a dentist. Kymbat Okas (17) from Almaty studies at the same university as Anuarbek, but specializes in General Medicine. 18-year-old Ilya Trenkin from Langer, who got the opportunity to study at the Medical College in South Kazakhstan Medical Academy, also plans to become a dentist. We hope that the guys will pass the exams of their first winter session well and continue to receive education and a scholarship at the expense of the foundation. By the way, they have already received the September scholarship.

Research Internships
– The news update on the winners of this program is as follows. Nariman Kaiyrbekov, Alua Yeskendir, Beksultan Kazybai and Darmen Ilyas have already successfully finished their research and came back to Kazakhstan. Dauren Sarsenbayev is on an internship in the USA, at Lawrence Berkeley National Laboratory until October 27. Azamat Yessengazin went to America on September 1 to the laboratory of the Department of Chemistry and Biochemistry at Ohio State University. His internship will wrap up in December. Aidana Segizbayeva will leave the country very soon. The laboratory of the University of British Columbia in Vancouver, Canada, is waiting for her. The young Kazakhstani will stay there until mid-December. Aidar Alimbayev has received a visa and will undergo an internship at the TAMIDS Scientific Machine Learning Lab in Texas. Svetlana Kolesnichenko is waiting for her visa to be issued. According to the plan, her internship should take place in Hamilton, Canada by the end of the year. Karina Sekenova, let me remind you, withdrew from the program due to personal circumstances.

Yessenov Launch Pad
– This is a program of extra education for IT specialists. Aida Sagandykova has chosen the course “Fundamentals of computer and web technologies with Python”, which is necessary for every web developer. It will start soon and last six months. Tolegen Akhmetov will head for a training on computer vision at Tokai University, Japan in early October. Ainur Kymbatova has just completed the course “Data analytics from scratch” at nFactorial school, which lasted 9 weeks. She plans to take another course after consulting with her mentor from our foundation. Kuat Madeniyet is engaged in a semi-annual course “Data Engineer” from Yandex Practicum. However, after 2 months of studying, he already received a job offer from two leading banks of Kazakhstan at once and even accepted one of them. Congratulations on that to him! Asset Daniyarov plans to take several online courses from Physalia Courses on data visualization in Python (October) and on multivariate data analysis (November). Asset also plans to pay for the IELTS exam with the remaining grant amount.