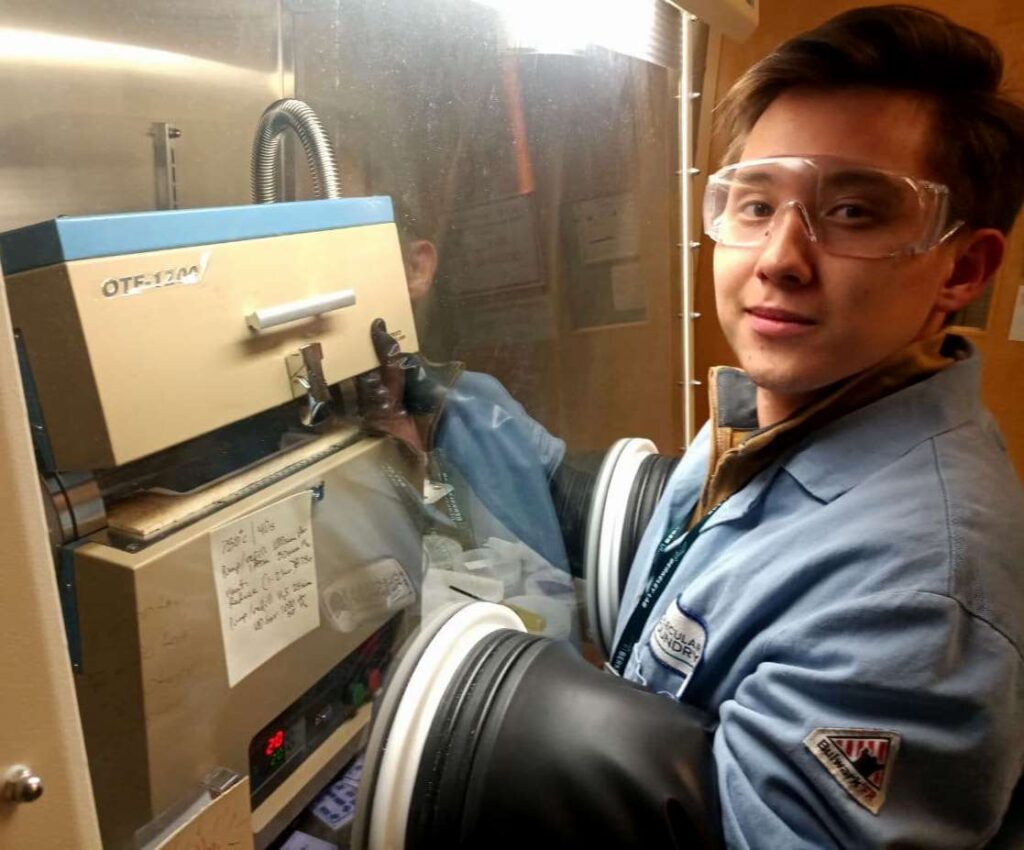 Arslan is 21, he is a third-year NU student from the village of Kordai, near the border, in the very south of Kazakhstan. In the pandemic year, the guy won the competition for Research Internships of the Yessenov Foundation. However, he was not able to use the grant due to the pandemic before 2021, when he was finally going to Lawrence Berkeley National Lab. The story of how he won the competition and did his research is below.

Why and how did you choose your specialty?
One day at school, after a laboratory work, I mixed the remnants of reagents and got an unusual black substance. Then I thought I had created artificial oil!:) We couldn’t figure out what it was. I generally had good grades in chemistry and math. But I did not plan to enter the Faculty of Chemistry. I was more interested in the practical application of science related to business. That’s how chemical engineering appeared on my horizon.

Why did you decide to take part in the foundation’s competition?
I decided that I would apply after I attended an event where the winners of the competition talked about the outcomes of their internships. I was inspired by their achievements, and I wanted to do more than just study. And I was able to win, because, I think, I didn’t worry during the second round and didn’t try to seem better than I really was.

How was the competition to you?
I liked the second round — a business game — the representatives of the foundation did not create unnecessary tension. All the contestants were already very worried. But everything was easy. However, when we started arguing about how to solve a group task, it seemed to me that this was “a one-way ticket” for everyone. However, in the end we came to a decision, and it turned out to be correct. Then I began to feel more confident. It was during this round that we got to know each other and realized that no one is inferior to anyone in anything, there was something to learn from everyone. Many of the applicants have later become my friends.

How was your internship, Arslan?
This summer I worked at Lawrence Berkeley National Laboratory. I was invited by Dr. Tevye Kuykendall. My scientific topic was synthesis and analysis of transition of the metal dichalcogenides. This is a new type of semiconductor. Our goal was to optimize the process of their synthesis for further use in thin and flexible electronics. Technologies are getting “smaller” from year to year, and semiconductors with a thickness of only a few atoms are in great demand today. We used a new research method, which was a time-consuming one. In order to complete my task I was required to precisely follow the instructions and to excellently know the equipment.

In the second week, I was entrusted to lead the project on my own. I’ve carried out about 50 experiments, but they gave results that we could not explain, and their analysis did not help us anyway. Attempts to find out what the problem was were unsuccessful. There will be no scientific publication, but even the results obtained were quite interesting. We presented them at a local scientific conference.

Why is an internship so valuable if you didn’t succeed anyway?
Well, firstly, this experience made me realize that everything in science does not always go according to plan and that this is ok. And secondly, I met scientists and laboratory assistants in America, learned how the scientific community there functions. Moreover, my skills in working with equipment and analytical instruments have improved significantly. The very fact of passing an internship in such a laboratory and receiving a letter of recommendation from a professor is also cool. This will definitely help me enter the one of the top universities in the world after I finish my bachelor’s degree here. Trust me, if you work as an intern five days a week from 9 a.m. to 7 p.m., you can do a lot.

What did you personally discover during your internship?
My adventures began on the very first day there. I checked into a hotel in a bad neighborhood of San Francisco, where there are a lot of homeless, mentally unhealthy people and… marijuana. Then I met the guys from the CIS, who had a spare room, where I lived until I left home. I went to San Francisco on weekends. I’ve been on a cruise, visited the Aquarium and the Exploratorium. Of course, I took a ride on the famous cable tram, swam in the Pacific Ocean, visited the Golden Gate Park, examined The National Academy of Sciences and watched a show at the planetarium. I really liked the nature in San Francisco itself. Also toured the campus of the University of California at Berkeley. And my instructor gave me a real gastronomic tour: every time we had lunch in different cafes, and I tried many cuisines of the world. I got acquainted with compatriots who work there, learned about the pros and cons of a small student town. And yes — the Golden Gate Bridge looks much cooler in reality than in the movies! Another discovery is that people are more open and positive here than in Kazakhstan. Their lifestyle and attitude to life prompted me to reconsider my own principles and goals. I am sure that someday I will come to study here.

How do you like to spend your free time?
I practice meditation, it helps me focus on important things at the moment. I like to read Remark and Michael Roach and watch science fiction series.