The “Chess at School” Republican Program has reached the final stage of implementation. In April-May, online teacher training for grades 3-4 will be held and online training will be organized for 12,000 students in 153 schools of Kazakhstan. The Program is financed and realized by the Shakhmardan Yessenov Foundation with the assistance of the Kazakhstan Chess Federation. 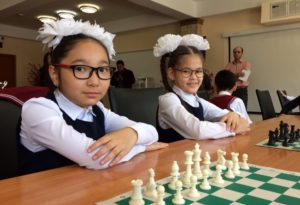 “In 2017, at the initiative of the foundation’s founder, President of Kazakhstan Chess Federation Galimzhan Yessenov, the Program was launched as a pilot project. At that time, it targeted only thousands of grade 2 pupils at 18 schools across the country. Since then, we have tested the methodology, textbooks for children and manuals for teachers in two languages. The Foundation has trained 360 chess teachers and 20 psychologists who have conducted a professional research into the psychodiagnostics of the development of children playing chess,” says Saltanat Nogaibalanova, the Shakhmardan Yessenov Foundation Coordinator.

Other achievements of the “Chess at School” Program include the teaching aids approved by the Ministry of Education and Science of the Republic for use at schools. From now on, they will be issued at the expense of the state. The “Chess” discipline itself is now approved by the Ministry as an elective discipline, i.e. children will be able to choose it from that part of the curriculum, which includes optional subjects.

“It is very important that chess is included in the school curriculum. We have developed an online platform for teachers’ education. We went further and created a program and educational-methodical documentation of the discipline for universities. After all, until now in our country chess coaches have not been trained. But everything is changing, and today 2 universities have made such specialties available. The most important thing is that psychodiagnostics of schoolchildren was carried out and the positive influence of chess on their academic performance was proved,”Saltanat continues.

Over the 3 years of the implementation of the “Chess at School”, the Foundation has provided 58 secondary schools of Kazakhstan with equipment for chess rooms, 18 schools have received printed textbooks, and the rest have received electronic versions of all materials. This summer, the rest 135 schools will have sets of educational-methodical documentation in hard copy. In June, a final report on the psychodiagnostics of the cognitive development of children involved in chess will be prepared. It will summarize the three-year program and help prepare a package of documents for the transfer of the “Chess at School” Program under the auspices of the Ministry of Education and Science of Kazakhstan.