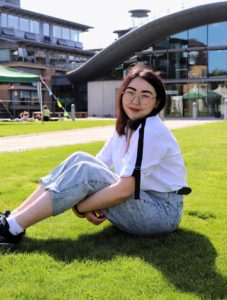 Is it cool for a young girl at her 22 not only to have a beautiful smile and play the piano, but also to study physics in Cambridge? Of course! Sabina is one of such girls. Her victory in the competition where participants competed for scientific internships organized by the Shakhmardan Yessenov Foundation helped her feel comfortable in the company of scientists from the laboratory of the center for mathematical sciences.

What was difficult enough for you in the grant competition?
On the first stage, the most difficult thing was to show all my love for science and space in a motivation letter. For me, these are not just snobbish words. People around me often tell me that my eyes light up when I talk about space. So, the idea of the task from the first stage was to describe how your “eyes light up” with words.

And did you choose Cambridge simply because it is cool, because if you won, the foundation would pay for everything, for another reason?
The reason was that there works a great professor, with whom I madly wanted to work.

What did you do during your internship?
I was supposed to learn how to create theoretical models of the movement of gases around the planet using computer simulations. Why? Because it is the gravitational collapse of gas in the Universe that is behind the formation of planets, stars, galaxies and many other objects of the universe.

And, did you manage to learn how to do it?
I used Python and PLUTO for simulation (code written specifically for astrophysicists). In the process of research, I had a lot of questions. Some were asked by my colleagues and the supervisor, some came up in my head. In order to answer them, I read a lot – the works of Lev Landau and Katie Clark. These works was needed for a better understanding of hydrodynamics. Since the simulations gave different results, it was necessary to understand why we see that different result. Most often, my supervisor knew the answer, but did not tell me the solution, but made me think deeper and try to understand it myself. I definitely became better at programming. I learned new computational methods and now I feel much more comfortable with codes. And in my free time I played ukulele, which I bought there in Cambridge.

What are you going to do next, Sabina?
I am working hard on the matriculation to doctoral studies. I firmly decided that I want to continue to study planets and stars, so I’m going to enter the doctoral degree course in theoretical astrophysics. At the same time, I continue working on the project, which I started even before my internship in Cambridge. It’s about star formation, but the approach differs a little: I analyze data from telescopes. It does not include simulations, but in the future I would like to do computational astrophysics and build theoretical models.

Update.
What’s going on in your life now?
I am studying for a master’s degree at Stony Brook University. I couldn’t leave Kazakhstan this semester because of the pandemic, but I started working remotely. I study the interaction of a planet-disk interaction with Professor Phil Armitage. I managed to do a lot of things in the summer. For example, I studied at the Yessenov Data Lab school for data scientists. I am active in the US Astrosociety, I decided to write a post on astrobites.org. This is a site where undergraduates write reviews on recent scientific articles. My review was about the orbital clustering of objects in the Solar system based on an article by Michael Brown and Konstantin Batygin. Soon – hopefully – I will go to the States and continue my studies there.  In addition to science, I released an EP-album. I wrote the songs and performed them myself.