The Shakhmardan Yessenov Foundation posted the first issue of “Physics in Comics” on its website in Kazakh and Russian languages. The publication is available for free download and aims to popularize science among students aged 10-12. 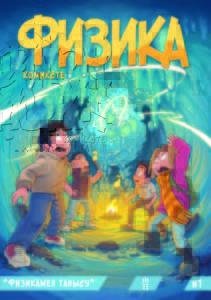 The first issue of the series was published in early 2019. The project to create a comic strip, developing an interest in science, was implemented in Kazakhstan for the first time. In its plot, physical laws and phenomena, borrowed from the classic book of Physics for Entertainment by Jacob Perelman, are naturally entwined. At the center of the narrative are the adventures of four friends, Kazakhstan schoolchildren who travel in time and space and in a fascinating way introduce useful facts to young readers. The work of the Foundation has already received high appraisal from experts and participants in the annual Conference of Enlighteners and the All-Scientific Forum in Moscow.

“During their tour, which is covered by 8 issues so far, our heroes (Yerik, Ruslan, Nika and Alibek) have been to the Charyn Canyon, ancient Otrar, Kaindy Lake near Almaty, the coast of the Caspian Sea and even in space,” – says the project coordinator, Nursultan Nurmukhanov. – “There are 2 issues left before the series finale and, realizing that now in the days of the quarantine due to coronavirus , many guys are forced to stay at home, and later they will start online training, we provide them with the opportunity to have fun and spend their time efficiently while learning something new all at once”.

The remaining issues of “Physics in Comics” (including the first issue uploaded for free) in Kazakh and Russian are available for sale. They can be purchased at online stores such as flip.kz, meloman.kz and bookcity.kz. Work on comics is performed by the Shakhmardan Yessenov Foundation jointly with the Kazakhstan company, KhanComics, creating the products recognized far beyond the local market, including international ones. Earlier, the Foundation provided part of the circulation of the publication to some schools and children libraries of Almaty for free.

Upd On May 7, we uploaded the second issue of Physics in Comics on the Foundation’s library.