On March 9, the first round of the scholarship competition of the Yessenov Foundation wrapped up. 30 contestants have passed to the final stage. Almost 500 Kazakhstani students have applied for the Yessenov Scholarship this year, and only 17 of them will be the winners. 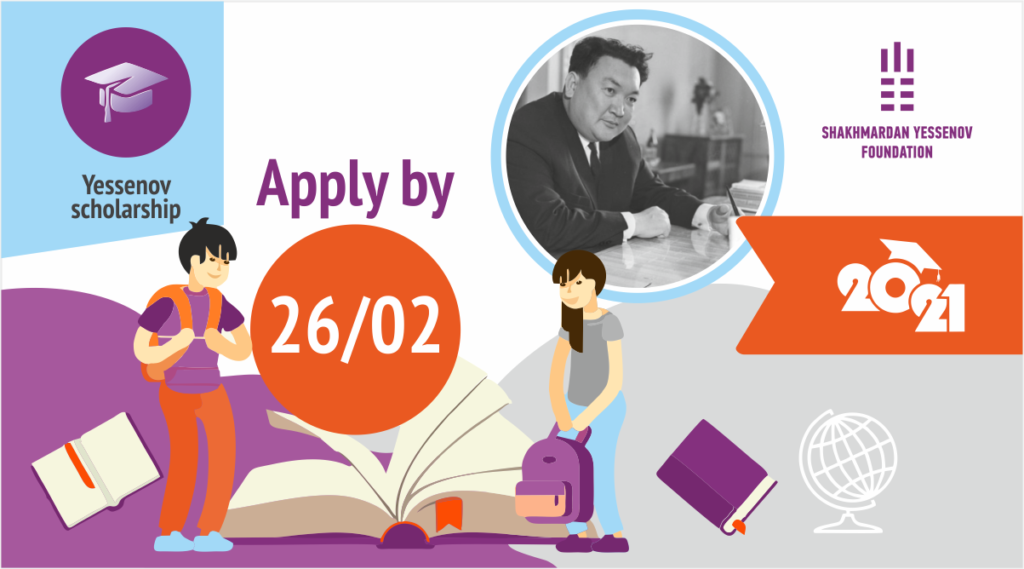 The executive director of the foundation, Aiganym Malisheva, answered our questions regarding the ongoing competition.

Please compare the level of this year’s contestants compare to their fellows from the last year competition.
We received slightly fewer applications than last year, but, interestingly, their quality has increased significantly. Honestly, it was not easy to select the 30 strongest bids for the second round. A large number of applications were submitted by students of Karaganda universities — 61. Almost the same number of applicants for the Yesenov scholarship are from Almaty, by 30 contestants are from Taraz and Shymkent. The winners of the 2020 competition also participated in this year contest — there are 7 such applications. Among the participants are 360 students of undergraduate program, 107 — of master’s degree program and 31 are interns. I would like to note that earlier the scholarship of the foundation, established by Galimzhan Yessenov in 2013, was available only to the 2 best students of Satbayev University (former –KazNITU named after Satbayev).

What mistakes did the contestants make most often when applying this year?
The most common one is inattentive study of the program regulations. Since 45 applications were not eligible in terms of the specialties stated in the provisions, we immediately rejected them. I think because of the same mistake some students provided an incomplete set of the documents: some applications lacked essays, while others – academic transcripts. The inattentive reading of the regulations is also proved by the fact that some students sent transcripts with a deliberately low GPA, i.e. below the 3.0 that makes the applicants ineligible for the competition.

Who decided the fate of the contestants in the first round, who will decide it in the second?
The first round was divided into two stages. At first, all the applications received were evaluated by the foundation’s employees: operational director Irina Grishchenko and program coordinator Aigerim Sultan. At the second stage, the work was carried out by the Yessenov Foundation’s experts. This year they were the winners of several programs of the foundation: Beksultan Abylkhani, Bimarzhan Assatova, Irina Dolzhikova, Berik Kaliullayev and Aslan Tabyldiyev. We have known each of them for a long time, and we have repeatedly been convinced of their professional expertise and that they can be trusted to select the winners. Each of them gave their points to the participants, which we compared with the ratings issued by our employees. So we selected the 30 best applications — finalists.

How did the selection process take place in the first round, what did you pay special attention to?
This round took into account academic performance, achievements in scientific, social and volunteer activities, and, of course, motivational letter. To get to the final, it was not necessary to have the highest GPA, it was important to demonstrate that the applicant is studying well (GPA not lower than 3.0), leads an active lifestyle, is interested in science (through participation in Olympiads, scientific conferences, etc.), consciously plans his life and set goals.

In what language and who will conduct the interview with those who have chosen the state language for applying and holding the final?
The interviews with all the finalists will be conducted by the coordinator of the scholarship program Aigerim Sultan, who has a pedagogical and law degrees. Moreover, she has passed special training, short courses on motivation, teamwork, leadership, emotional intelligence, and other related subjects.

What will be new in the second round, when and how will it be held?
If during the first round we select the contestants according to the submitted documents, then in the final it will be a 30-minute interview with the participant in a free form. Due to the pandemic, we conduct it online. The final will be held from March 25 to 31 on Zoom platform. Questions being asked will allow the contestants to demonstrate the level of their motivation, as well as their communication skills, life position, leadership, interest to the science, and other qualities and skills. So, from 30 finalists, we will select 17 winners, who will receive a monthly Yessenov Scholarship in the amount of 27,000 tenge during the year. We plan to publish the list of the winners on April 2-3 on the foundation’s website and in our social networks.