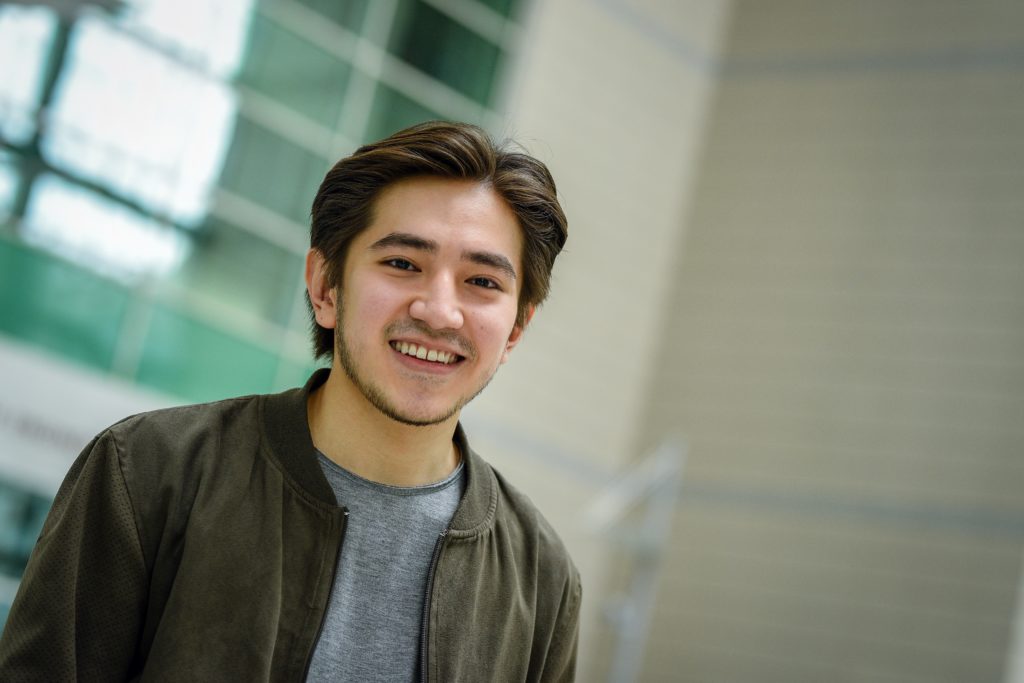 An admirer of running and swimming, a connoisseur of good wine and meditative music before going to bed, 22-year-old Bekasyl from Astana won Yessenov Foundation competition less than a year ago. Even though he has not yet finished his Bachelor’s degree studies, today the prospects of great science are already opening before him. Now he has doctoral studies on the horizon.

When did you start to be interested in chemistry?
It’s amazing but I was never “super” in chemistry, I was enthusiastic about mathematics and physics very much. So at school I did not even think about chemical engineering, which became my specialization at the University. However, when I entered the University, I realized that I got my money’s worth, as it became more and more interesting to me with every passing day. I mean specifically chemical engineering, not chemistry, because it’s wrong to think they are one and the same. For example, there is a lot of physics in the science, which I have been studying for four years. Chemical engineering has a multitude of options, opportunities and trends. And this makes me free to choose the future field of my activity.

What was the most difficult for you in the final competition for the grant?
My biggest fear was that I couldn’t understand how the organizers of the competition would evaluate us, by what criteria they would choose the best. Yes, I knew that it was important to remain yourself and behave naturally when doing tasks. However, easier said than done. After all, I could start to panic during a business game and not to show a proper spirit. Therefore, I recommend all the contestants to calm down and be as natural as you can. I just did it,  you’ll do it too.

How was your traineeship?
I served my traineeship at the Molecular Foundry of the Lawrence Berkeley National Laboratory. I was lucky that my project instructor was Tevye Kuykendall, one of the best mentors I have ever met. Our project concerned the lateral transformation and nanomaterial synthesis. The traineeship was informative and really enjoyable. In addition, Berkeley itself is a dream place to live and enjoy, and I’m happy that I visited it.

Did you manage to accomplish everything what had been planned?
Yes, I definitely succeeded in achieving the main purpose of the traineeship in terms of gaining experience. The aim of the scientific work was the synthesis of transition metals, which are an interesting class of semiconductor materials. At the end of the traineeship, I could achieve excellent results, and I even presented the finding of the work at the annual nanoscience conference, which was held at the Lawrence Laboratory – it was a bit of a hackathon for programming specialists.

And what’s the next move, Bekasyl?
As a whole, the trip to America gave me a clear-cut idea in what direction I want to move in the future. I am very close to getting a bachelor’s degree. I think this is going to happen in summer. And after that I will join the doctoral program in the field of nanoscience and nanotechnology. That’s for the present. I can say with confidence that the summer of 2019 dramatically influenced what I would further do in my life. Previously, I tackled many projects in parallel and did not feel which of them I really liked, but now I know for sure. This seems to be a new beginning.