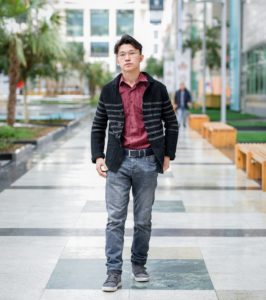 19-year-old Aivar is not one of those funkillers or nerds who touches a ball with a ten foot pole. He loves football since his childhood in Taraz. However, he began to tune into the beat of physics later, in the 7th grade of the Kazakh-Turkish lyceum. Taking part in the Olympiads, he did not notice how he became a student seriously studying this science. Later there was a win in the competition of Academician Sh. Yessenov foundation and a traineeship at the Federal Polytechnic School of Lausanne.

What was the competition for traineeship grant best remembered for?
Other competitors and their stories. Each of the participants deserved this grant, and I was interested to find out what motivates them to pursue science. At the beginning of the second round, I was a little bit excited because I had not participated in such competitions before. Nevertheless, when we started to solve team tasks, the excitement left me, and I was only thinking about how to solve those tasks.

What did you do during the traineeship?
I studied materials with a relatively new stage of substance. It is called topological insulators. My goal was to study the contribution of these insulators to the movement of acoustic waves (sound). I learned to use the COMSOL Multiphysics, which is widely used for analysis and simulation in physics research. I acquired wealth of experience and even managed to travel a bit around the country, since nature in Switzerland just obliged me to do this. By the way, I also did not forget about football. I went to Barcelona, ​​visited the famous Camp Nou football stadium, with what I am happy to the max. During the internship, I discovered a new hobby – hiking.

What did you manage to achieve at the internship, and what did you come short of?
The subject I studied turned out to be more complicated than I expected. During the traineeship, I was not able to complete the work to publish it. However, having returned to Kazakhstan, I put the finishing touches to my part of the project and now I am looking forward to good news from the colleagues from Lausanne. We hope that our article will be published in the near future. Another important point for me was that I received a good recommendation from Professor Romain Fleury.

What will happen next?
Now I am looking for companies to undertake my summer traineeship in 2020. I want to try myself in industry to choose what to take up – academic research or industry. I am preparing for the upcoming doctoral exams; I hope to enter a good university. Perhaps I will continue to study topology. And in my free time I prepare schoolchildren for Olympiads. I like to watch their progress – it is inspiring.

Update
What are you doing now, when the borders are still closed?
I am applying to universities in the United States for a joint master’s and doctoral program. It usually takes more than six years to graduate, and eventually you can get a PhD. Despite the fact that I specialize in physics, I decided to make a shift to electrical engineering, that’s how an internship at EPFL influenced me. Last summer, by the way, I did an internship at CERN (Switzerland). However, it’s a pity that the program was held online due to the pandemic.