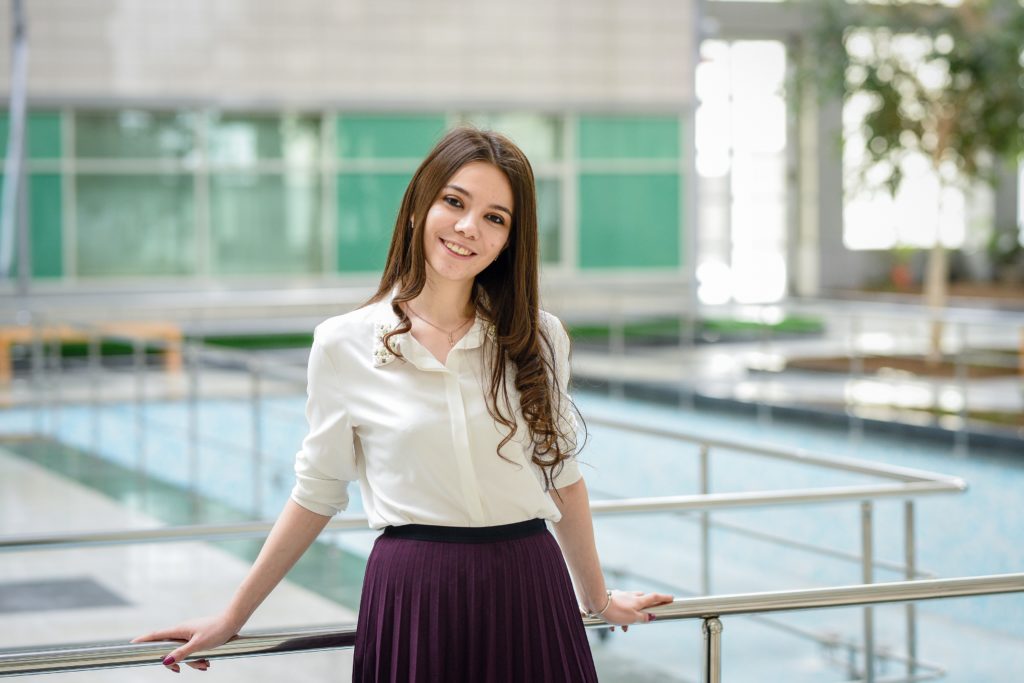 She went to America this summer. No, not like this. It will be too simple and wrong for this 22-year-old student from Petropavlovsk. Dina not just won a grant of the foundation named after Academician Yessenov, but took part in a program for international students in one of the most important research centers in the world – in Princeton.

It all began with dances. As a child, Dina often traveled with her dance troupe. Time passed, and the dances disappeared, but the desire for travel remained, as, by the way, the love for science fiction. Conducting researches allows our heroine to travel a lot and even participate in the implementation of once fantastic ideas. She is inspired by new places and even more by people whom she meets during her trips.

How and when did you realize that you will do chemistry?
I love not just chemistry but chemical engineering which contains several sciences at once. In particular, physics and mathematics which I really liked at school. In the tenth grade, when everyone had already decided on a future specialty, I didn’t know at all what to do in the future. And then chance played a role: I wanted to study the oil and gas business, which is popular in our country, but ended up in chemical engineering sphere. I fell in love with a specialty already in the process of training and research work. It is curious that my interest to chemistry never woke up.

How was the training period?
I was one of more than 20 people that participated in the program for students from different countries. I worked with peers from China, India, Hong Kong, Egypt and other countries. I lived in a dormitory and trained in the group of Professor Athanassios Z. Panagiotopoulos. I was supervised by three young doctoral scholars. I studied molten sodium chloride. Why? It is a popular electrolyte used in fuel cells. We tested two models of the parameters of the atom interaction to determine which is more suitable for calculating the chemical potential of the compound. I remember the trip to Philadelphia really good. In a short time I befriended the guys: On July 4, we traveled together to New York to see the fireworks. Also we celebrated my birthday on the beach of the Atlantic Ocean.

What did you manage to do during the months of your internship?
Firstly, I am now able to work with the Linux operating system. In addition, I expanded my knowledge of the Gromacs program. I worked with this program before but I learned some functions recently. I mastered basic programming skills in Python. And how much literature have I read in three months! We were able to calculate the chemical potential of sodium chloride under different conditions and confirm the correctness of our guesses. Having returned home, I continued to work on this project. As a result, we completed the study, and now we are working on an article. I think we will complete it until the end of the year and at the beginning of the next – we will publish it in a scientific journal.

What are you planning?
To enroll in doctoral studies at a good university and continue research. Many people think that doctoral studies are a continuation of study, but this is the implementation of own project. Another erroneous opinion is that study at an academy follows doctoral studies. But this is not so, and perhaps I will go to work for production. And in the near future I should finish the article, defend the graduate thesis and get a bachelor’s diploma. In parallel, I will learn Python as chemical engineers need it.

You have the opportunity to say something to the guys who are considering whether to apply for a foundation grant competition.
I think that it’s not worth considering, it’s better to just prepare all the documents and submit an application. Nothing bad will happen if you give it a try and get an experience that will affect your whole life.