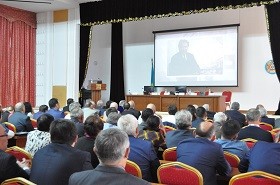 This year on September 21-22 there has been the International Scientific and Practical Conference “Minerageny of Kazakhstan” organized in Almaty in the conference hall of the K. I. Satbayev Institute of Geological Sciences, which was dedicated to the 90th anniversary of the birth of a prominent scientist and production organizer, a well-known statesman, educator of engineering workforce and academician Shakhmardan Yessenov.

Organizers of the conference: Shakhmardan Yessenov Science and Education Foundation, Academy of Mineral Resources of the Republic of Kazakhstan, K. I. Satbayev Institute of Geological Sciences, Satbayev University.

“Science on Earthquakes and their Risks in Central Asia”  Almaty, September 2016

This conference is supported by the Shakhmardan Yessenov  Science and Education Foundation having a long tradition of encouraging geological studies and related education in Kazakhstan. Among the co-hosts of the conference are the Institute of Seismology of the Republic of Kazakhstan, the National Research Technical University of the Republic of Kazakhstan and the project “Earthquakes Without Borders” * (Great Britain).

* The project “Earthquakes Without Borders” has been organized by scientists from British universities and other institutions and represents partnership between independent earthquake researchers and social scientists in countries that make up the large earthquake-prone belt from Italy to China. One of the objectives of the project is to increase the level of development of the science on earthquakes and mitigate risks related thereto by way of sharing knowledge, information, techniques and research data between partner countries ( http://ewf.nerc.ac.uk/).